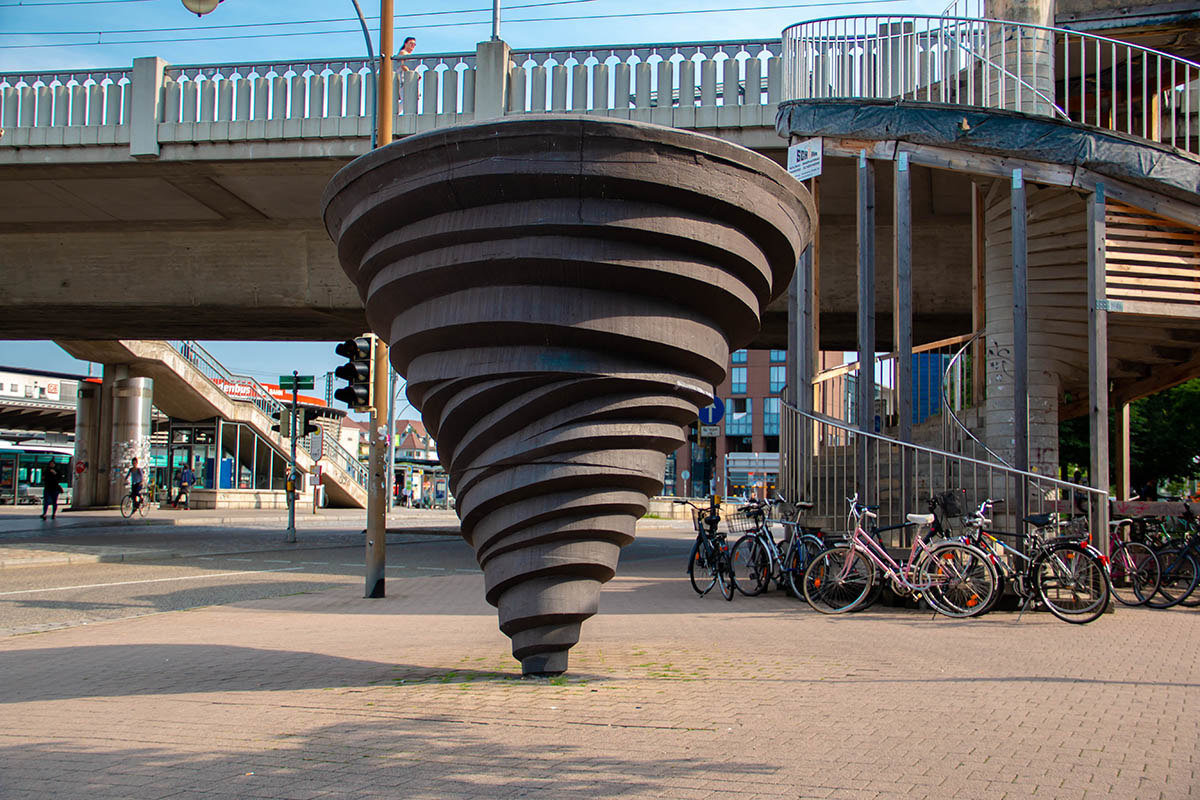 When this sculpture was erected in 1961 on what is now the old synagogue plaza, the people of Freiburg were initially less than enthusiastic about their new reclining citizen and expressed their displeasure in many letters to the “Badische Zeitung” newspaper and the university. The state had acquired the two-meter-long and almost two-ton new casting of a design from 1953 as art in architecture for the university’s new college building. One of the most amiable nicknames given to the Reclining Figure at the time was the “Emmental Venus.” The sculpture's international status is underlined by its participation in exhibitions by the Henry Moore Foundation, which has already brought it twice to Perry Green in England, where the artist once lived. The sculpture is insured for a sum of 1.5 million euros for each of its journeys across the English Channel, a considerable increase in value compared to the original purchase price of 30,000 Deutschmarks.

An allotment garden area was demolished to allow the construction of the vocational school center and Eschholzpark. In designing their large sculpture, the artist couple's aim was to create a reminder of this  history in the form of a 10-meter high, 84-meter long red hosepipe complete with  tap. Their design won the City of Freiburg's art competition in 1980, but it was another two years before the work of art was realized. For its production at Mannesmann, a steelworks in Mühlheim in the Ruhr area, the plant engineer had to develop a special new process to bend the 30 hose parts in two directions at the same time. A model by the artists provided a template for the steelworkers. A special transporter then relocated the different parts of the sculpture  to Freiburg. The cost of 400,000 Deutschmarks was financed by the city as art in architecture for the vocational school center.

The nine life-size bronze sculptures had an eventful history before finally arriving in their present location as a complete ensemble in the Kollegiengebäude III University building in 1996. In 1978, the Berufsverband Bildender Künstler Südbadens (BBK - South Baden Artists' Association) launched a competition for design ideas for Freiburg's Metzgerau street. The Swiss sculptor Bettina Eichin won this competition with the design of her new figures. “Draped in heavy cloth, they carry the burden of history,” was her explanation of the deviation from the common perception of the Muses, described by Goethe, for example, as “ethereal.” The competition jury was enthusiastic and recommended the design to the city for implementation, with 270,000 Deutschmarks in the city budget set aside for it. Several members of the BBK, however, were far less enthusiastic about the design and protested vigorously against its installation. After five years, a compromise was reached. The city purchased one of the figures, the “Sleeping Muse,” for 30,000 Deutschmarks; it was placed in the mayor’s study. Two years later, the city’s cultural committee voted for the purchase of the other muses. Six of them were to be exhibited at the State Garden Show, followed by a true odyssey for the ensemble. From a storage room in the Mundenhof zoo, they traveled on loan to the University of Bern, the University of Berlin, and to Basel. It wasn’t until 1996 that a permanent location for the bronze sculptures was found in the stairwell of the Kollegiengebäude III building of the University of Freiburg.

“My aim for these cones was to make music visible; I was trying to express the elements of rhythm and movement.” The artist calls her four sculptures cones rather than spinning tops. Their angles of inclination of 60, 70, 75, and 80 degrees create a strong counterpoint to the vertical elements on the facade of Konzerthaus Freiburg (Concert Hall). Although the cones are hollow inside, they weigh a total of 22 tons. An accumulation of rain could overturn the sculptures, in spite of their large concrete foundations, so a water drainis installed for protection. The cast iron sculptures were produced in the Roll Voith industrial foundry in Heidenheim, Swabia. The placement of the work on the city square was tested prior to actual installation using triangular models made of 1:12 scale roof battens covered with black fabric by art students at Freiburg Pädagogische Hochschule (University of Education).

An unusual work of art in an unusual place – under the city railway bridge in Stühlinger Kirchpark are two giant figures, or rather their heads, hands, and feet. They are connected by a “Freiburg Bächle.” This channel is filled with water by the “Spitter” which then flows into the mouth of the “Swallower.” The sculptures were created in 1982 during the reconstruction of the church square in Stühlingen; the city spent 170,000 Deutschmarks for the work by Franz Gutmann, a sculptor from Münstertal area and fellow student of Joseph Beuys. The two steel ladders on the back of the “Spitter” provide a special viewing angle. They take you up to the eye holes, allowing you to look through the slab at the watercourse and the second giant. The artist's dedication "Gutmann macht, Humbert lacht" (Gutmann does, Humbert laughs) expresses his desire for his work to bring a smile to the faces of the people of Freiburg, and in particular the city's urban planner of the day, Klaus Humbert.

No citizen of Freiburg could seriously predict what the Holbein horse will look like tomorrow, and no one has seriously counted how many times it has already been painted over and decorated. The concrete sculpture was sold to a private buyer in 1936. Four years later, the city of Freiburg acquired the 1.9 meter tall work weighing around one ton. The parks authority installed the figure on a grassy area near Holbeinstrasse, which is how it got its name. The initially unsigned work was signed by its creator Werner Gürtner in 1950, at the request of former Lord Mayor Wolfgang Hoffmann. Nothing happened for a long time after this, until the little horse mutated into a zebra in January 1981. A local resident had whitewashed the scribbled-on animal, which gave two 15-year-olds the idea of painting zebra stripes on the sculpture; an idea they transformed into reality under the cover of darkness one night. This coat of paint proved to be one of the most durable so far. Subsequently, the little horse has served as a bearer of declarations of love and marriage proposals, congratulated countless birthdays and worn soccer jerseys. Passers-by have since been surprised at its transformation into a unicorn and Pegasus. The circumference of its belly grows by 3 millimeters every year due to new layers of paint. It was last cleaned by the city in 1998, when it was transported away by car for restoration works. During this work, a paper-mâché cow temporarily stood in its place, at its hooves a sign bearing the words “Vacation Replacement.”

The inhabitants of Freiburg’s Landwasser district were allowed to decide on the name for the twelve-meter-tall sculpture for themselves. The artist and freelance architect Eberhard Rau has not named the piece he created in 1973. The sculpture originates from a first prize in a competition of several housing companies for a work of art in a public space. The upper bodies of the three figures are mounted on a concrete foundation that allows them to rotate freely and constantly realign themselves depending on the wind direction. They were created from iron scaffolding and covered with polyester. According to the artist, the two human figures with striking wide eyes and cheerful smiles can be regarded as a man and a woman, and form a couple. But in contrast to what people often guess, the third, square-shaped face doesn't represent their child. Instead, it shows a demigod from Roman mythology: Faunus. As the god of nature, he is a reminder of the formerly forested area cleared to make way for the new neighborhood.

“Please do not feed” reads the sign on the railing of the commercial canal on the Gerberau street. It refers to the crocodile, or more precisely its head: approximately one meter long and made of granite, one of the most popular postcard motifs in Freiburg. This tourist attraction, with its impressive teeth, has featured at every Freiburg city rally since its installation in the waters of the canal in 2002. The sculpture was created by stonemason Ole Meinecke a year earlier as part of a term paper at the Weinbrenner Gewerbeschule vocational college. The Himmelsbach family, whose dry cleaning operation the crocodile now gazes upon, acquired the work for 3,500 euros and invested another 300 euros in the approval fees under water law for installation in the commercial canal which feeds the Freiburg Bächle with water.

It looks real from a distance. Only at close range is the bronze sculpture recognized as such. The abandoned coat commemorates the deportation of 450 Jewish men, women, and children to the Gurs concentration camp in France in 1940. The deportation point was very close to the Wiwili Brücke (Wiwilli Bridge), on the approach to which the coat sculpture is draped. The idea for the poignant sculpture came from the deputy head of the city's cultural office, Johannes Rühl, and the municipal council unanimously accepted his concept. Using photos of a coat from the 1940s, the sculptor Birgit Strauch created the bronze sculpture in 2003. The coat has an engraved Star of David on the left chest pocket, which was chosen even though the Star of David was not introduced until 1941. The historical background is explained on an information board beside the sculpture. “The memorial has a clear message, yet leaves room for reflection. The coat symbolizes what the deported people left behind, even in our minds,” is how Johannes Rühl explains his concept.

Historical preservation and graffiti are probably natural enemies. The story of the Graffiti House at Kirchstrasse 17 in the Freiburg district of Wiehre impressively proves this hypothesis. In 2016, the owner of the house, built around 1870 in the historicism style, commissioned the graffiti artist Tom Brane to redesign the facade. Much to the displeasure of a neighbor who submitted an anonymous objection to the design, upon which the responsible construction authority prohibited the continuation of the graffiti work. At this point, however, the project already had many supporters who spontaneously formed a citizens’ initiative – their online petition received 1,700 votes and a petition over 3,000 signatures. Media coverage reflected the great interest in the issue and was  sympathetic. The surprising turnaround came on October 10, 2016: the construction authority unexpectedly revoked the protected status for the residential building. An inspection revealed that the interior of the building had undergone major changes in the 1960s and 1970s, and that the historical conservation order could no longer be justified. Classification as a monument had been based solely on the appearance of the facade in 1982, rather than an inspection. As a result of this ruling, Tom Brane was able to finish his graffiti, concluding with the following dedication: “For children and the young at heart.”