Come springtime when the first rays of sunshine appear and the trees start to leaf, Freiburg’s Municipal Park transforms into a combination of picnic meadow, yoga center and concert venue. 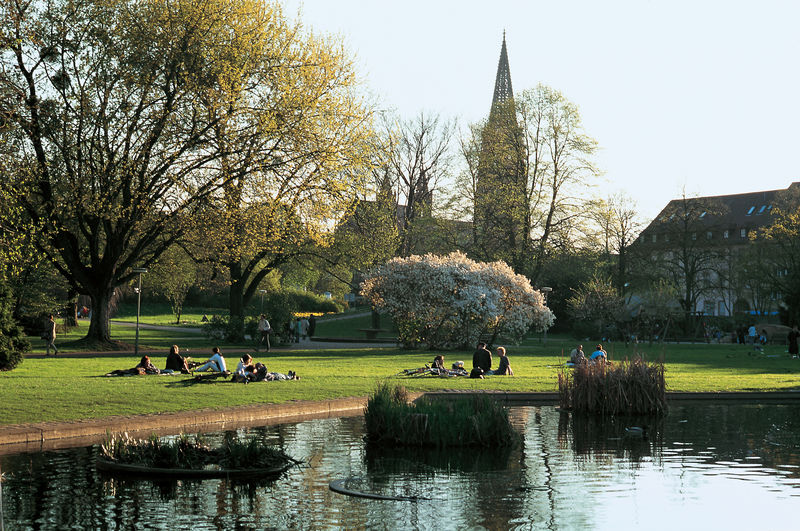 Since 1888, the tranquility of this green city oasis has been a favorite with both children and adults, and a great place to catch some rays.

Listen to the chirping birds or watch the ducks paddle their way to their oversized fellow aquatic bird, the "Erpeldenkmal", a statue of a drake, a male duck, and an icon of Freiburg’s main green space. Local tradition says that, on November 27, 1944, the loud quacking of a drake warned Freiburg's citizens of an imminent air raid by the British Royal Air Force, which destroyed a large part of the historic Old Town in just a few minutes. The story goes that many people got to the air-raid shelters in time to save themselves. The drake’s neck cranes upwards, his bill open and quacking. The statue was erected in the Municipal Park in 1953 as a memorial for world peace.

The ceramic drake statue stands in the middle of a pond, surrounded by large, old trees and aquatic plants.

Take a break in the beautifully landscaped park between walking tours of Freiburg and museum visits. The gardens feature over 250 varieties of roses and countless flower beds from spring through to fall.

Hop on the Schlossberg Railway to reach its namesake 460-meter peak, Freiburg’s own city hilltop.

We recommend heading for the Schlossberg at sunset to enjoy the view over Freiburg!