Why is the Cathedral at the top of the list of things to do in Freiburg and a favorite among locals? 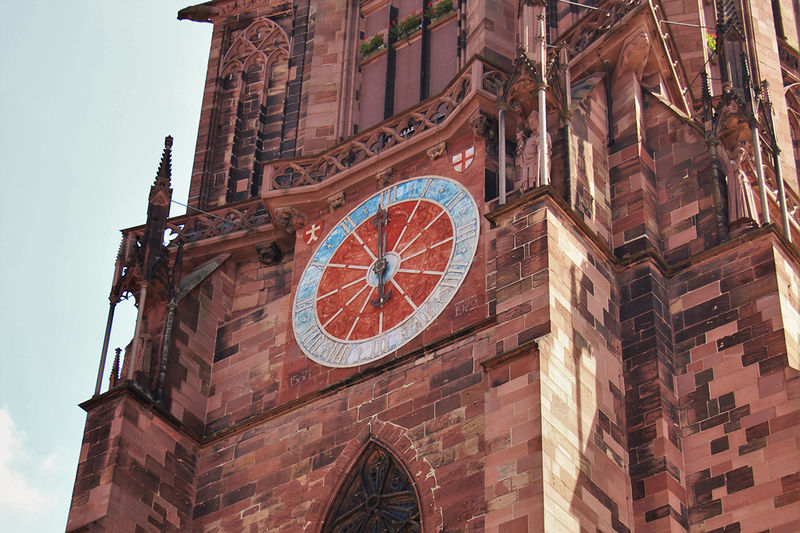 It might be the fact that its construction took over 300 years. Its planning required incredible foresight, over generations. Most of the builders never saw the finished product. They simply had to trust that the Cathedral would be completed as they had imagined.

But it might also be due to its 116-meter west tower, described by art historian Jacob Burckhardt in 1869 as “the most beautiful spire on earth.” The massive walls and magnificent pillars in the lower section symbolize the connection to the ground. In counterpoint, the spire opens to the sky. The ornate pinnacle represents the first time in the history of Gothic architecture that a spire was built in an open lattice structure. For that reason, it has served as an architectural and artistic model for countless European churches.

Or is it the 750-year-old Hosanna bell that gives Freiburg Cathedral a certain tone? The three-ton bell is one of Germany's oldest Angelus bells, which are rung before the traditional Roman Catholic Angelus prayer service. The Hosanna’s ring is unmistakable: melancholic, loud and clear.

Miraculously, Freiburg’s Cathedral was spared in the bombings during the war and now bears witness to over 800 years of Freiburg’s history. And so much history needs to be preserved, which is why nearly every day of the year, the Cathedral is being maintained, cleaned and restored.

Freiburg Cathedral is history, but also present and future. Today, you can experience the colorful scene of the Münstermarkt farmer’s market.

Tip: Take a walk around the cathedral and stop to take a closer look at the gargoyles. The 91 individual figures are tasked with protecting the cathedral’s walls from too much rainwater. But the gargoyles do more than just direct water away from Freiburg’s landmark– they are supposed to keep evil demons away from the church. Which is why many of these eerie creatures are depicted with tortured, screaming mouths.

Short note on accessibility: Ramp at the main entrance, no elevator in the tower - 333 steps! Acoustic amplification systems, induction loop, tactile model for the blind.

Please note: Due to the COVID-19 pandemic, a tour of the Münsterturm is currently not possible!