Danger: Leave the city at your own risk! The Schwabentor was built in the middle of the 13th century as a city gate, part of Freiburg’s defense system for protecting its citizens. 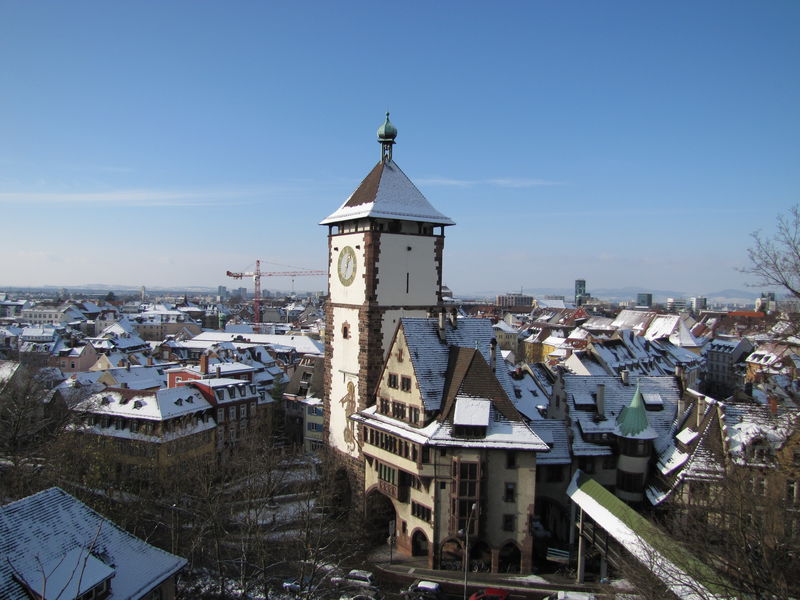 It must have been a real adventure to venture outside the city walls in the Middle Ages. Mysterious forests, strange roads and the constant fear of being attacked by robbers kept both merchants and travelers on their guard. Anyone who hadn’t been put off by their own fear might have paid heed to the warning of the 'Boy with Thorn' (Dornauszieher) about leaving the city.

The relief figure with an oversized head and no neck grimaces with a tortured expression. He sits atop the gate’s portal, legs crossed, pulling out a thorn from his foot. This symbol of sin and punishment since ancient times has led historians to surmise that the small relief on the Schwabentor is a reminder not to stray from the right path.

Those who did dare walk over Salzstrasse through the gate could immediately cross the Dreisam Bridge to reach the most important trade routes in the Black Forest. A Swabian salt merchant once traveled one of these routes to Freiburg, having fallen in love with the city on a previous trading expedition. He brought with him barrels full of money, which he intended to use to buy Freiburg. But the citizens simply laughed at him and derided his plan, especially when, with much fanfare, he opened the barrels to discover that his penny-pinching wife had intervened. She was not very enthusiastic about her husband’s idea of spending all his money on a city and had the wise foresight to replace the money with sand and stones before he set off.

Legend has it that this is how the Schwabentor came to be named. And since the 17th century, the salt merchant and his wagon have adorned the inside of the town gate. The patron saint of Freiburg, St. George the dragon slayer, is emblazoned on the gate’s exterior wall.

Tip: The only way to see the inside of the Schwabentor is to visit the Zinnfigurenklause, a unique museum of miniature tin figures. 10,000 handmade tin figures depict the most important historical events in Freiburg and the surrounding region.

Short note on accessibility: Swabian Gate is wheelchair-accessible from Salzstraße and can be visited from the outside. Accessible restroom on Augustinerplatz. Tin figure cabinet in the Swabian Gate is not accessible!