The Schlossberg is such a Freiburg attraction because it offers so much: the founding story of the city walks under a canopy of green forest, or sunsets over the city rooftops. 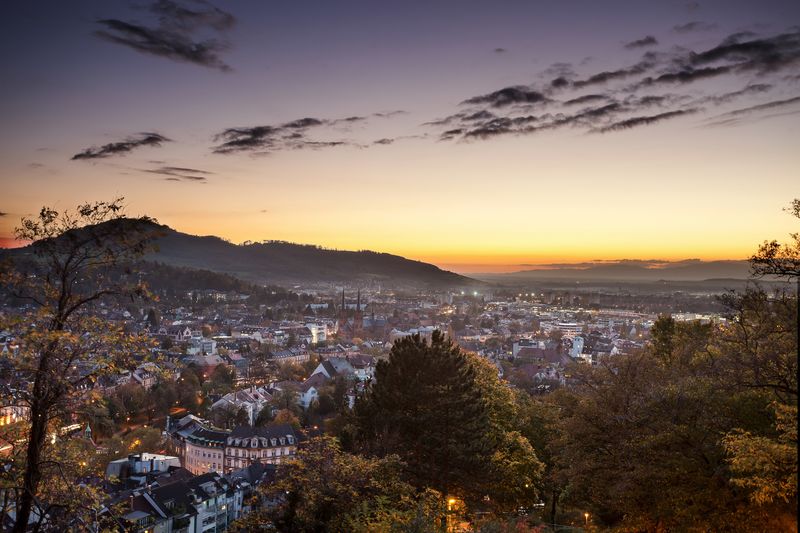 When the sun bathes the evening sky in shades of orange, red and purple, both locals and visitors love to take in the fantastic view over the historic Old Town of Freiburg. Climb up to the top of the castle tower to take in a 360-degree panorama or enjoy the sunset light show over a drink in the beer garden. The Bächle, narrow streets and cathedral all radiate a warm glow against the undulating backdrop of the Vosges Mountains. At such moments, Freiburg is truly at its most picturesque.

Perhaps the Zähringens, Freiburg’s first noble family, were also in the habit of enjoying a refreshing drink while gazing out over their first settlement and Breisgau Bay? It is quite possible. It was on this site that the dukes of Swabian nobility built their first fortified castle nearly 1,000 years ago, giving the Schlossberg its name (in German, 'Schloss' means castle and 'Berg' means mountain or hilltop).

The castle was then successively taken over by the counts of Freiburg, the Hapsburgs and then the French occupiers, who in the 17th century incorporated the medieval castle into the city’s fortifications. Today, the Schlossberg boasts ample evidence of its eventful past, such as the ruins of Baroque walls, the Bismarck Tower built in 1906 and the Cannon Square.

Tip: Celebrate with us! At the end of July, the different levels of the Schlossberg transform into five large stages. Live bands and DJs create a party atmosphere in the Kastaniengarten (Chestnut Garden), the castle moat, the Leopoldshöhe, the water reservoir and the Cannon Square. To find out more about the Schlossberg Festival, visit: http://www.schlossbergfest-freiburg.de