The Old Town Hall is located next to the New Town Hall on the Rathausplatz. The two buildings are joined by a bridge and both house the offices of Freiburg's city government. 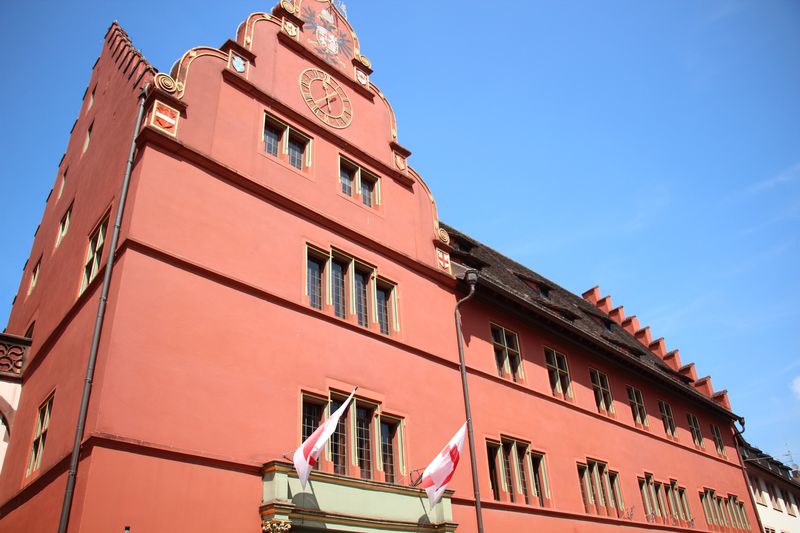 The history of the Old Town Hall dates back to the late 13th century, when the city of Freiburg erected an initial building on what was the Franziskanerplatz (now the Rathausplatz) as office space for the town clerks.

In the High Middle Ages, Freiburg was of one Baden’s flourishing cities, resulting, over time, in the need for a larger city government. The city was forced to purchase more buildings or build new ones, leading to the completion of the Old Town Hall in 1559.

The magnificent building is typical of Renaissance architecture, boasting a parapet supported by pilasters and many colorful paintings by regional artists. Unfortunately, the Old Town Hall was destroyed by fire during the bombing raid of November 27, 1944. Only its outer walls survived the fire.

During its reconstruction, three new wings were added and the facade was finished entirely in red sandstone. The centuries-old tradition of the painted town hall facade was continued in the gable, which depicts the two-headed eagle of the Holy Roman Empire above the clock.

Today, the ground floor of the Old Town Hall houses the Tourist Information Office. The historic entrance hall leads to an open area. A stroll across the excavated cobblestones from the Middle Ages brings you to our offices.

Insider info: The New Town Hall is older than the Old Town Hall, and the city’s oldest town hall is called the Gerichtslaube, or 'Old Court House'. We explain the back story of this curious naming convention in our text on the New Town Hall.