The first chapel on the church’s current site dates back to 1206. In 1226, Count Konrad transferred the property to the Franciscan Friars for the construction of a monastery, which was built in stages. 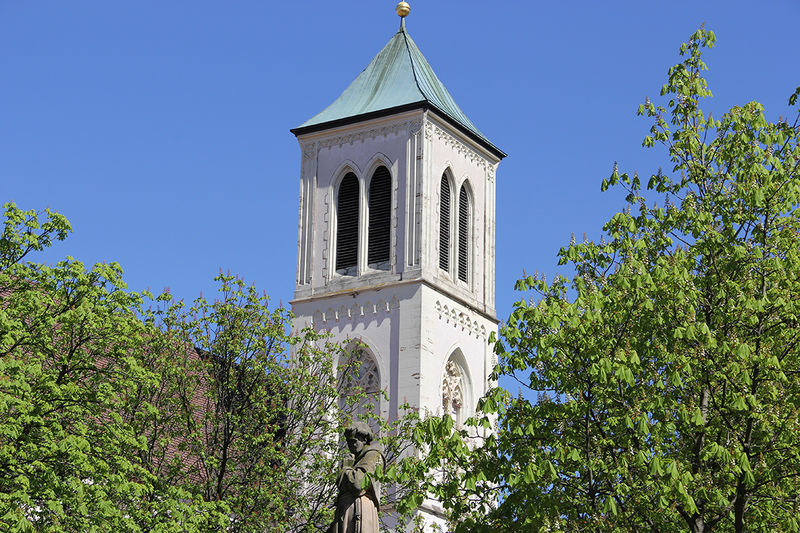 The former "Franziskanerkirche", which belonged to the Franciscan order, was allegedly the site of the invention of gunpowder by a monk in the 14th century. So what is the story?

Legend has it that Friar Berthold Schwarz was conducting alchemical experiments and ground together saltpeter, sulfur and charcoal in a mortar. He placed this mixture and the pestle on top of the stove and left the room in good spirits. Fortunately, he was no longer there when his concoction exploded. It makes for a nice anecdote, although it is probably not quite true, given that gunpowder had already been discovered in the 13th century. Nevertheless, it is said that the black powder (another name for gunpowder) was named after its inventor ("Schwarz" means black in German). Eventually, a monument to Berthold Schwarz was erected in 1851 on what is now the town hall square (Rathausplatz), in front of the former Franciscan Church.

Over the course of time, the church’s decor evolved to reflect changing tastes and styles. For example, after the Thirty Years' War, a Baroque interior was created, followed later by typical Neo-Gothic elements, which replaced the Baroque and Rococo altarpieces in 1875. The fact that the Franciscans were forced to leave their monastery in 1783 is no doubt also part of the reason behind these modifications. Afterward, the church would function as the parish church of St. Martin.

During the air raid of November 1944, phosphorus bombs caused both the monastery and the church to catch fire, with the top of the tower collapsing into the nave. Only the outer walls of the aisles and the western gable remained standing. Reconstruction of the church began in 1949, with a dedication taking place on St. Martin's Day in 1951. Today, it still offers the public a peaceful retreat in the middle of downtown Freiburg.