“It would be an unprecedented act of irreverence if one were to lay a hand on these venerable and impressive witnesses of Freiburg's most ancient history with the intention of tearing them down. [...]” These were the words of Lord Mayor Otto Winterer, shortly after taking office in 1888. 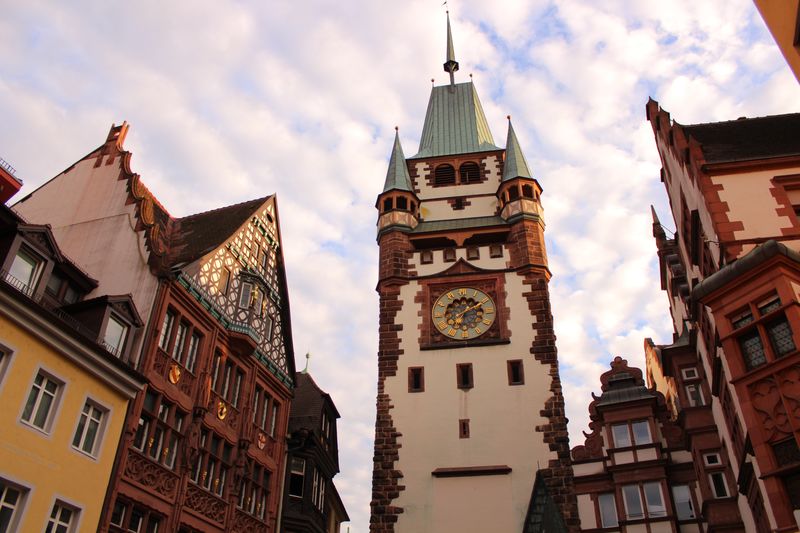 In light of plans for the construction of an electric trolley car line, some citizens and businessmen were demanding the demolition of the Schwabentor and Martinstor. Freiburg's two remaining medieval city gates (there were once five in total) had survived all the many wars, but critics viewed them as obstacles to the development of a modern transportation system.

Mr. Winterer, however, had a different view. The mayor wanted to highlight the importance of the two historic 13th-century towers, commenting that “a village has roofs and a city has towers,” which he then managed to extend upward. Instead of tearing down Martinstor, the city actually almost tripled its height, from 22 to 63 meters. A 15th-century style turret was added and, to placate the critics, a larger opening for the trolley cars.

Like the other four towers, Martinstor had been built flush with the city walls and the battlement. On the outer side of the wall, there was also a huge forecourt that served as an additional defense, as well as a bridge spanning a moat twelve meters wide and five meters deep. On the east side, the former opening to the battlements can still be seen about six meters up.

A plaque in memorial of the victims of the witch hunt is located on the inner side of Martinstor. Three widows of city councilors, Anna Wohlffartin, Catharina Stadelmennin and Margaretha Mößmerin, were beheaded and burnt during the first wave of persecutions from 1599 onwards. They are remembered in honor of all victims from the 16th and 17th centuries. Although Martinstor was chosen as the memorial for the witch hunts, it was mostly a prison for debtors rather than witches, giving rise to an expression that translates to: “they dressed him with the Martin’s coat.”

Short note: Martin’s Gate can only be viewed from the outside!